BTC is a great company, but we don't rest on our laurels. We are always trying to get better and there is always something going on with our business. Whether it's a new product offering, a new quality certification, or industry-related article, this section will keep you up-to-date on everything BTC

Just click on any of the links below to read the latest news:

EL SEGUNDO, Calif.--FDH, a portfolio company of Audax Private Equity (“Audax”), announced it has acquired Societe AHE Inc. (“AHE”), a Montreal, Canada based distributor of aerospace hardware focused on the rotorcraft market. AHE expands FDH’s reach with additional product offerings in the rotorcraft segment, serving a diversified customer base across the globe.


This is a full virtual event and can be accessed by registering at XPONENTIAL.org.  AUVSI XPONENTIAL 2020 is the world’s largest event for unmanned and autonomous systems set for October 5-8 as a fully interactive experience.


BTC Electronics shares your concern about the on-going Coronavirus (COVID-2019) situation.  As a Distributor to the Aerospace and Defense industries, we intend to remain open and we will continue to operate and service our customers to the fullest extent possible.

BTC Electronic Components is Now a Authorized Distributor for Corsair Electrical Connectors
As part of the agreement, BTC will distribute D38999 Series 1, 2 and 3 and 26482 Series 2 (MS3470’s) of Corsair Electrical Connector’s product line. Additionally, BTC will now be able to offer a full range of Aircraft External Power Receptacles (MS90362, MS3505, MS17845 and MS3506-1).

One of the most frustrating and expensive problems during product development is a unit failing EMC/EMI testing while at a test facility. Recently, a military vehicle went up against this scenario, facing repeated issues in passing RE102 from 2MHz – 400MHz.

BTC Electronics is more than a distributor, we add value to many of our connectors - with an extensive inventory of components - we have the flexibility and the expertise to get you the product you need.

Visit us April 14-16 at the AAAA Summit
Join us in Nashville for the 2019 Army Aviation Mission Solutions Summit. The only opportunity for the entire Army Aviation Community to gather in one place at one time focused solely on Army Aviation issues.

New Micro-Miniature Connectors
The requirements at EMC tight housings, specifically for the termination of wires and cables are growing. Filtered connectors are now offered that include outstanding EMC tightness and very small sizes.

Now Offering c-enx™ EN 4644 Modular Rectangular Connectors
The c-enx™ series from Cinch Connectivity Solutions offers a wide range of solutions based on two insert sizes with a large variety of shells and contacts. The series is standardized by the EN 4644 European Standard.

BTC Holiday Hours
BTC Electronics is observing a Holiday shutdown so we can spend time with our families. We will be out of the office 12/25/2017 - 01/01/2018. Have a Safe and Happy Holiday!

ORD Series: Vehicle Jump Start
These connectors are ruggedized to withstand severe battlefield environments, carrying currents of up to 500 amps at 28 Vdc continuously in temperatures down to -55°C (1000 Amps for 6 minutes).

Did You Know?
BTC serves most major military OEM's with our cable assembly and wire harness division. We are small enough to turn quotes & prototypes around quickly; and experienced enough to handle your toughest interconnect issues.

BTC Electronics is exhibiting at the Sensors Expo
From June 27-29, 2017 we will be in San Jose at the McEnery Convention Center Booth #1426. Come visit us to learn more about the latest in engineered interconnect solutions and for your chance to win a Quadcopter Drone.

Need an ultra-miniature, high reliable connector?
We now offer one of the smallest coaxial connectors for pico coaxial cables with an extremely high EMC shielding that can withstand high mechanical forces.

Need to Reduce Signal Noise Induced by Electrostatic Charges?
Electrostatic charge can influence Analog and Digital communications by increasing the signal to noise ratio through a decrease in background noise.

Need hermeticity over a wide temperature range?
We are now offering HSC Extreme Temperature GTMS Hermetic Connectors for use in next generation aircraft turbine engines.

How to Select the Proper Backshell
The key to successful backshell selection is proper product application. To do this, a complete description of the backshell's intended use is required.

Conesys Introduces Class Z - Black Zinc Nickel per MIL-DTL-38999
Aero Electric, a division of Conesys, is qualified to Class Z (RoHS Compliant, Black Zinc Nickel) plating for MIL-DTL-38999 rev M, for example D38999/26ZC35PN. This plating will also be available for commercial use in all of the families of mil spec circular connectors and industrial connectors that Conesys offers.

Mil/Aero cable assembly challenges require “out of the box” options
A fresh approach to cable assembly and wire harness demands keeps military and aerospace manufacturers on budget and, more importantly, on time.

SEALTRON AND BTC CELEBRATE A SUCCESSFUL 20-YEAR PARTNERSHIP
In 2015, Sealtron, Inc. and BTC Electronic Components celebrate a partnership that began back in 1995 when Sealtron, a well-established manufacturer of QPL and custom-designed glass-to-metal-sealed connectors, recognized the need to sell its products into a new distribution channel. At the same time, BTC Electronic Components was in the market for a manufacturer of hermetic connectors to add to its distribution line card. The agreement that resulted from those common aspirations has thrived in the two decades since.

BTC has the Largest Stock AB Connectors Products in the US
AB Connectors - a subsidiary of TT electronics plc. - is known around the world as a leader in manufacturing complex electronic connectors.

BTC Earns Silver Boeing Performance Excellence Award For Second Consecutive Year
In a letter signed by four of Boeing’s Supplier Management Vice Presidents, the company congratulated the BTC team for “demonstrating their dedication to the high performance standards necessary to meet customer expectations and remain competitive in the global economy.”

BTC Expands Distribution Sales Team
Working out of the BTC corporate headquarters in Wake Forest, NC, the Team will be responsible for handling all distribution accounts and providing an enhanced customer experience.

Aero-Electric Connectors Are In Stock and Ready to Ship!
BTC prides itself on world-class service and quality while providing customers with the best value in the industry.

BTC Earns Silver Boeing Performance Excellence Award
BTC maintained a Silver composite performance rating for each month of the 12-month performance period, from Oct. 1, 2011, to Sept. 30, 2012. During this time the company had a composite quality score of 99.98% and delivery score of 100%.

BTC Unveils New Video and Updated Line card
The team at BTC is excited to release our latest video - More Than a Number - and an updated line card featuring a fresh new look.

BTC Electronic Components Has World’s Largest Hermetic Connector Inventory
BTC stocks a wide range of mil-spec hermetic connectors along with specials and is the only franchised distributor for the Ametek/HCC Industries family of companies – Sealtron, Hermetic Seal Corporation and Glasseal.

BTC Joins SourceESB
In addition to the website part search, BTC customers may now find the interconnect part they ned through SourceESB.

BTC and Meritec Announce Franchised Distribution Agreement
Meritec is a market leader in providing interconnect solutions to their customers through innovative technology and engineering expertise.

BTC Unveils New Website
BTC’s new website was designed with the customer experience in mind and the end result is a website with a clean, innovative new look, robust content, easy-to-use navigation and tools to enhance the user experience.

Paul Moseley Appointed New President/CEO of BTC Electronic Components
Moseley brings a wealth of knowledge and experience from his background in both international and North American markets.

BTC Announces ITAR Re-Certification And Approval
The ITAR Registration means that BTC Electronic Components is able to fully support military and defense-related projects around the globe.

BTC Becomes One of the First Connector Distributors to Earn AS9100 Rev C Certification
According to International Aerospace Quality Group's (IAQG) Online Aerospace Supplier Information System (OASIS) database, BTC is one of first connector distributors to earn the certification.

BTC Expands Line of Trompeter Installer Tools
Emerson's Trompeter line has upgraded their line of installer tools and BTC can supply them to you. The new tool, designated as the CT5, requires 25 percent less physical effort to achieve the same results as the CT4L, providing a definite advantage to the installer over the tool it replaces.

BTC Adds IP67 Waterproof Connectors & Magnetic Modular Jacks to Their Product Roster
The Edac Group – one of BTC’s 30 franchised/authorized lines - has expanded their line of waterproof connectors and now offers a new line of magnetic jacks.

For the 9th Year, BTC to Participate in Annual Bike MS Event
Bike MS benefits the Eastern North CBTC & Bike MS Carolina Chapter of the National Multiple Sclerosis Society, and proceeds are used to fund research, programs, services, education and advocacy for the over 5,300 individuals living with multiple sclerosis in eastern North Carolina.

BTC Featured in Connector Supplier Magazine
BTC's president crafted an article on the paradigm shift in the electronic components distribution industry and the importance of adding value.

BTC Earns ITAR Registration
Directed by the U.S. Department of State, ITAR is a program that regulates the export and import of U.S. military and defense related equipment and information.

Keith Filter Promoted to Director of Product Management
Mr. Filter will have full responsibilities for the company's purchasing, inventory management and vendor management.

BTC Earns AS9100 Certification
Achievement of this certification signifies that BTC meets and exceeds internationally recognized standards for quality, safety and reliability in our products and processes.

SSMC Connectors Offer 12.4Ghz Performance in a Micromini Package
SSMC connectors are ideal for use in limited-space applications that require the rugged design of a threaded coupling interface.

BTC Designs & Value-Adds High Reliability Connectors for Medical Applications
With over 30 years in the industry, BTC is considered the "connector exports" BTC and has expanded its high reliability connector expertise to the medical industry.

BTC Earns 100% Performance Record
This report is based on monthly, quarterly and rolling performance reports provided by our customers and also on responses to BTC's satisfaction surveys.

BTC Electronic Components Agrees to Become a Fully Franchised Distributor of Trompeter Electronics' RF Interconnect Products
This addition to this product offering allows BTC to reach into new markets and allow them to better serve the RF connector needs of their existing customer base.

BTC Awarded AS9120 Certification
Based on ISO 9001:2000 Process Approach to Quality Management Systems, AS9120 includes additional requirements for product safety and reliability specific to aerospace distributors. 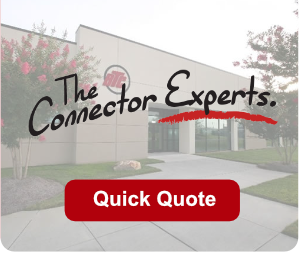